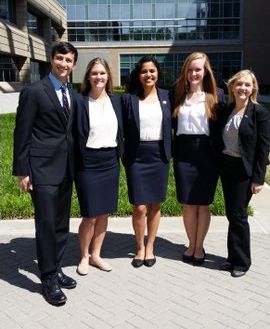 In their senior year, all students in the Bachelor of Science in Public Policy program enroll in a fall/spring capstone project sequence. In Policy Task Force, they apply the knowledge and skills from their core and elective courses, internships, and other experiences to address a current policy problem faced by a government agency, not-for-profit organization, or business firm. These organizations need real-time and expert analysis.

Under the guidance of two faculty facilitators and occasional client input, and with advice as needed from the public policy faculty and others at Georgia Tech and beyond, the students prepare a detailed analysis of the client's problem; formulate alternative solutions; analyze their benefits, costs, and effectiveness; identify the most useful and practical approach; and prepare a professional written report and team presentation to the client. Projects such as this occasionally are conducted in graduate policy programs. The undergraduate program at Georgia Tech is unique in its approach to preparing students for professional jobs and graduate study with a senior-level project that, in many cases, has an actual impact in the policy arena.

Professors Diana Hicks and You Na Lee are currently looking for clients with two-semester projects for our 2022-2023 students. In 2021-22, the class was in-person and all client interaction was over Zoom; we can easily continue to do this in the coming year.

The class cohort will be 30 students, and we are recruiting five projects to be worked on by groups of six students.

There are a few things potential clients should know.

Once the initial conversation occurs with the instructor(s) and the decision is made to move forward, we need from you a one- to two-page project description that provides the following: background on the project, why it is important to the organization, and what questions you need answering. We do not move forward on committing to any clients without this brief proposal. Typically, we will provide feedback on the submission, and will let you know whether we can accept your proposal. Determinations are made based on skillsets of students, the feasibility of the project (generally and within the course constraints), and the clarity of the project goals.

If you are interested in being one of our partners, please contact Diana Hicks (dhicks@gatech.edu) to begin the process. We would expect to have one or two Zoom meetings over a couple of weeks to work through scope conditions. Although we keep the process fairly informal, it is vital to set up appropriate expectations for both partners. There is a small fee for participating organizations.

"We had an amazing experience with the Georgia Tech Public Policy Task Force! The students were so impressive, not only with their subject matter expertise, but with the passion and enthusiasm they displayed when tackling our project. They clearly heard our pain points and delivered a professional-level report with concrete and realistic recommendations that we look forward to implementing in the future." — Atlanta Emerging Markets Inc. 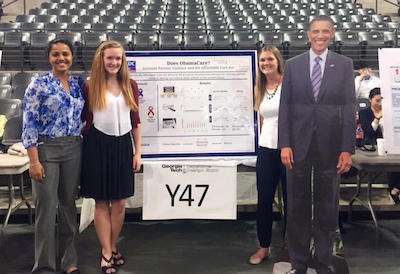 More than one in three women in the U.S. have been victims of Intimate Partner Violence (IPV), a type of violent crime which has lasting physical, psychological, and financial implications for victims (Black et al., 2011). The Affordable Care Act (ACA) includes provisions that aim to increase patient access to IPV preventive services, but its impact on the uptake of IPV prevention by healthcare providers has yet to be assessed. This study addresses this issue by exploring the question: How has the Affordable Care Act (ACA) affected the uptake of preventive services for intimate partner violence among non-elderly adult women in the United States?

This study investigates the impact of the ACA on IPV prevention by triangulating three sources of quantitative data related to IPV screenings: (1) insurance billing frequency, (2) online searches, and (3) physician training. Each of these metrics is then compared to two other preventive health screenings (HIV and suicide risk). HIV screening is similar to IPV screening in that both are recommended by the U.S. Preventive Services Task Force (USPSTF) and are therefore required to be covered by insurance without cost-sharing. Suicide risk screening, however, is not required to be covered by qualifying insurance plans, as the USPSTF gave the screening a rating of “insufficient.” We used a difference-indifferences test, comparing IPV screening with HIV and suicide risk screening, to distinguish the ACA’s impact on IPV screening.

The results of the analysis are initially mixed. Univariate and regression analysis of the insurance billing frequency and physician training data suggest that the ACA did not have a positive impact on the provision of IPV screenings while the same analyses of online search volumes suggest that the ACA may have been effective. Further analysis through difference-in-differences tests comparing IPV with HIV and suicide, respectively, confirm that the ACA has not been effective at impacting the provision of IPV prevention services. However, the timeframe for analysis has been short. In several years, the same study may lead to different results if additional parameters and datasets are included. 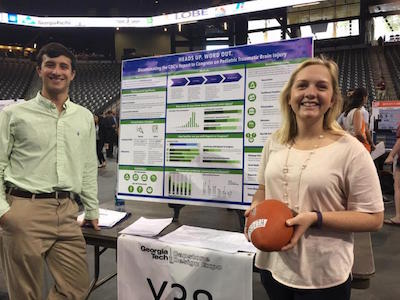 The Traumatic Brain Injury Act of 2014 ordered the Centers for Disease Control and Prevention (CDC) to submit a Report to Congress by the end of 2016 on the management of traumatic brain injury (TBI) in children. In preparation for the Report’s release in November of 2016, the CDC wants to develop a dissemination strategy to heighten their Report's impact among stakeholders.

This study examines seven stakeholders with an interest in the 2016 Report’s recommendations. Six of these groups – healthcare providers, educators, policymakers, researchers, caregivers, and patients – are considered active stakeholders because the CDC has engaged them and believes that the 2016 Report is relevant to their work. The seventh group – made of members of the general public – is considered a latent stakeholder group because the CDC has not targeted them, but members of this stakeholder group may become part of another group.

A survey was conducted to assess how each stakeholder group differed with respect to three variables: knowledge of TBI, perception of Reports to Congress, and preferred communication channels. This survey was emailed to TBI stakeholders who might use the Report in their work because of an existing knowledge of and work with TBI. These stakeholders were identified as members of the six active stakeholder groups and include members of TBI organizations such as the Brain Injury Association of Georgia and the National Collaborative on Children’s Brain Injury. It was also posted on an online polling platform, Amazon’s Mechanical Turk (M-Turk), to reach additional active stakeholders and members of the general public.

These results indicate that the information in the 2016 Report should be differently disseminated to reach each of the seven stakeholder groups. For TBI professional stakeholders, the CDC should publish the information from the Report on their website and in professional magazines, policy summaries, and academic journals. To target non-TBI professional stakeholders, the CDC should promote their findings that directly relate to caregivers, patients, and the general public on their website and on social media platforms, particularly Facebook.

Public Policy seniors in Task Force 2015 are working for the Centers for Disease Control and Prevention, America's public health agency.  While our clients are rotating in and out of Africa working to get the Ebola epidemic under control, SPP undergraduate students are focused on domestic issues of interest to the CDC - healthy homes and reduction of salmonella infections caused by contaminated chicken. One team of students is analyzing the history of changes to building codes to identify factors associated with successful building code changes so they can advise the CDC how to protect lower income families from dangers such as mold, pests, and radon by strengthening regulations and guidelines to make homes safer. Another group is undertaking a cost benefit analysis of adding probiotics and essential oils to poultry feed to provide the CDC with the tools needed to convince industry to remove antibiotics from chicken feed and substitute alternatives that have been proven effective without creating antibiotic resistant salmonella strains.  The third group is analyzing efforts for health education for minority communities to identify strategies that CDC can use to enhance the effectiveness of its educational materials on safe handling of chicken in home kitchens in minority households.

The 2015 Capstone Design Expo winners of the Public Policy Award are Brittany Dodson, Sam Lancaster, Jason Lupuloff, and Aaron Peek. These students partnered with the CDC for Farmaceuticals to identify what percent of poultry feed supplemented with probiotics and essential oils is necessary to reduce salmonella incidence in humans, to determine the necessary poultry market penetration for this new approach to have an impact on public health, and to calculate the economic impact on the introudction of antimicrobials on society and industry.

In 2014 Public Policy participated in the Georgia Tech’s Capstone Design Expo, which featured more than 900 students and 170 teams from eight schools and three colleges tackling real-world problems.  The annual Expo showcases projects from the undergraduate senior design courses in which students work together to design products or tackle real-world problems, sometimes at the behest of sponsors.

More than 5,000 visitors roamed McCamish Pavilion checking out projects that ranged from life-saving medical devices to tools to make life easier. Independent judges assessed the projects and awarded a cash prize to the best project from each School.  The Public Policy prize was won by team UrbanAgSwag who looked at the urban agriculture initiatives in other cities to help the Atlanta Local Food Initiative boost urban agriculture, taking into account zoning ordinances and other factors.  Additional notable projects included: