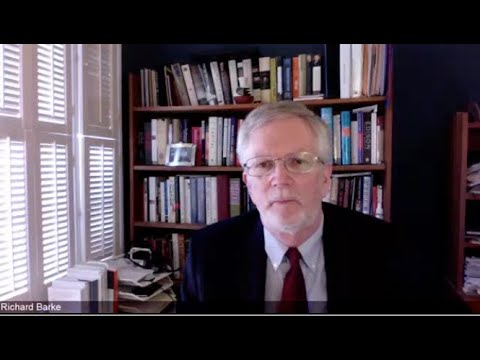 The Ivan Allen College of Liberal Arts focuses on identifying and addressing the most pressing problems facing society, from the Covid-19 pandemic and its effect on child welfare to the moderating the thorny politics of nuclear arms and diplomacy. The key to discussing any of these issues is establishing a healthy environment to do so.

That was the focus of “Rebuilding the Civic Square,” a virtual panel discussion held on February 2, and led by Richard Barke, associate professor and director of undergraduate studies in the School of Public Policy. Three other guests joined the panel, including Kim Harrington, Georgia Tech’s chief human resources officer; Elizabeth Darnall, an alum of the History, Technology & Society program who is currently a health policy advisor for Sen. Chris Murphy of Connecticut; and Jacob Chambers, an undergraduate computer science student.

During the event, which Barke said was meant to provide “perspective and conversation” about recent events in the world, participants discussed the forces and voices shaping the current moment in history and what could be done to improve our civic discourse. He opened the discussion by shifting perspective to the United States’ history at large. Barke brought up events like the Alien and Sedition Acts of 1798, the acrimonious presidential campaign between Thomas Jefferson and John Adams, and the Cuban Missile Crisis in the late 1960s as remindera that this is not the first intensely challenging time in the country’s history.

“It can, and should be, troubling, in many respects, to look at our history,” Barke said. "It can also be somewhat reassuring. We survived these challenges."

With that backdrop, the conversation then shifted to the task of crafting a productive forum for discourse on the country’s problems. When asked about the idea of unity that President Joe Biden made a main theme of his campaign, Darnall offered an alternative ideal for the country to pursue: the concept of union.

“Unity is something that I think we strive for but, for me, sort of implies that we’re all in the same place at the same time,” Darnall said. “And I don’t think we are.”

Union, Darnall said, can accommodate different perspectives and approaches while acknowledging the importance of moving forward as one body.

The forum also covered the topic of whether the country is really as divided as it appears. Barke recalled a memory of former senators Al Gore and Pete Domenici, who were from opposing political parties, cordially hashing out a policy discussion – away from television cameras.

Chambers compared the tribalism and intense partisanship in politics to that of a sports rivalry like Georgia Tech and the University of Georgia and wondered whether that dynamic could be overtaking the idea of politics as a way to solve problems.

“Do we secretly crave the cheering masses of our team versus the other team?” Chambers asked.

The forum ended on an optimistic note with participants agreeing on the importance of listening and understanding others’ ideas and perspectives.

“I think it’s possible to say (that) we’re not okay right now, but I am confident that we will be okay, that we can recover that footing,” Chambers said. “I think my time at Georgia Tech has shown me that people are willing to talk with you, if you’re willing to speak with them.”

The full discussion can be viewed above.